Finally I reached beginning of the end my Wizard's journey in Diablo 3 ;) Got Paragon 100! I made some nice screenies like straight from Lord of the Rings ;) to honor that moment :) 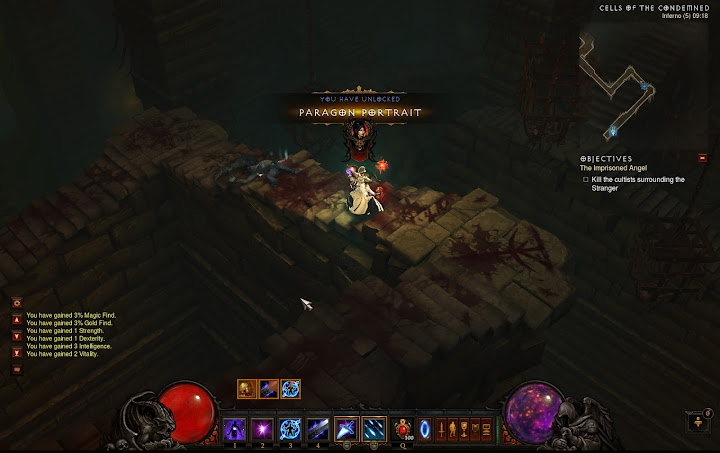 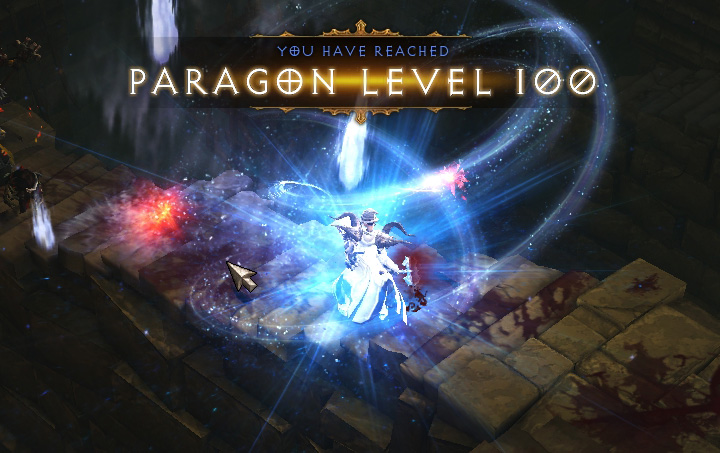 I got into D3 from the first moments I have played. I knew I will be playing Wizard long before game got released. I started my adventure kinda late, because at the 2nd half of December 2012. I had no time for games earlier. It has cons and pros. Lot of bugs got removed, but I have never seen that very difficult Inferno. Now game is just to easy.

Till level 35 (Paragon) I wasn't thinking about typical farm at all. I was playing through whole acts, I was picking up every single item, open every single box and kill every single monster. Game was so fun and even it has some flaws I think D3 is great game. I also spend lot of time on making Achievements. 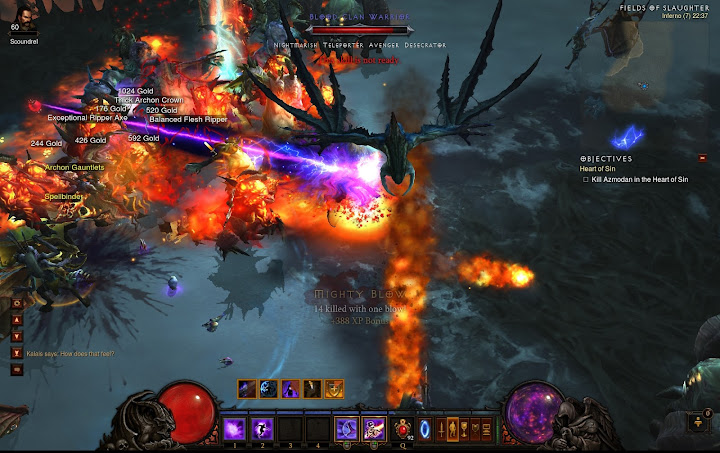 At this P35 I made Diablo 3 Exp timer and started thinking about hitting max level. I was looking a lot on the exp counter and figure out where I can get decent exp, but also have lot of fun. I wasn't chasing pure efficiency, because I am not a robot. Game is entertainment and not a boring bot-job. So from beginning till P100 I was picking up every yellow item, gems, tomes etc. It was totally not efficient in terms of exp/h but who cares ;) I love loot! :)

I played mainly at MP5 because I enjoy there the most smashing thousands of monsters. Elites was goin' down in few seconds and I... was not ;) Sometimes I did die. It was kinda good balance between difficulty and having fun.

Since beginning I loved Disintegrate and Archon and around those 2 skills I made primary builds. At beginning Archon was just my extra power for bosses because I couldn't stay in Archon form for long. With my character getting stronger Archon times got longer and longer.

I tested many build variations. At some point I thought Temporal Flux with Cold Blooded will grant me extra 20% damage at Archon. Well... that's not working that way ;( Finally I spend 90% of my time on that build:

My build in Blizzard's skill Calculator

When Archon run off and cooldown is still on (it is not that common since patch 1.0.8 - increased mob density) I got 2 skills - Blizzard with reduced mana cost (Snowbound rune) - great for spam whole screen with AoE spell - and Spectral Blade Healing Blades (additional 5% Life Steal) which makes you kinda immortal while tanking.

I sometimes played CM/WW wiz, I got some extra items for that build but I find it kinda boring. And my hands and wrists! They hurt after hours of spam keys ;) But for soloing Ubers or playing at MP10 CM/WW is irreplaceable. 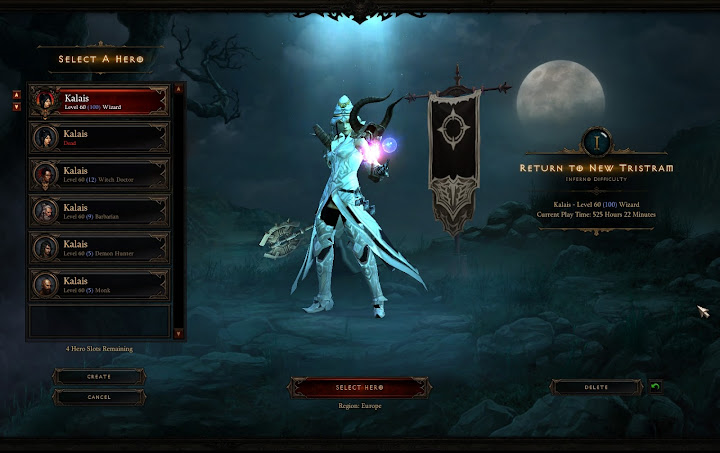 During 525 hours of playing I got 2 decent drops. I am most proud of they amulet I still use: 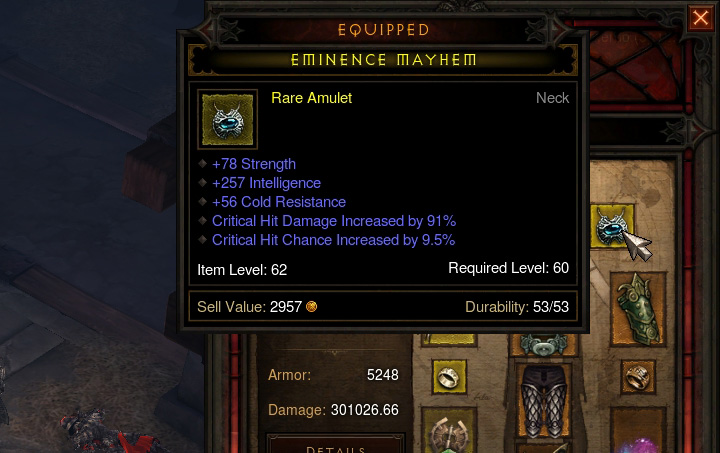 Second drop was Zunimassa's Vision with Crit Chance. Sold for 80mil. Got also like 8-10 Rare and Legendary items which got sold for 10-20mil. I am not into spending real money on virtual items so all gold I collected is pure in-game earned. Few times I bought something cheap and sold for much more. In general I don't want waste much time at AH so my mnain income is from selling drops. I am selling every usable item I find. I made much more gold from selling good and medium yellows then legendaries coz legendaries drop in 99% cases with sux stats. After that run from 80 to 100 I got 3 full chars of items waiting to be sold on AH.

I picked up every single Gems and Tomes. Every single gem I got equipped I crafted myself from materials I found. Maybe that's not a big achievement but I enjoy it really and I have next goals coz need some more Topaz and Emeralds ;)

One more thing worth mentioning which I was crazy about is my white hat! :) I think that masks idea in D3 is fail. I have no idea why every top helm is just a mask with string leaving naked head. So stupid for me! I wanted to own some classy hat like Gandalf ;) and after long searching I bought for 15mil this piece! Looks so cool, got very high rolls of good stats and that armor, yay! Maybe it does not make your DPS skyrocket like Mempo but I not gonna switch it for mask with string lol ;) 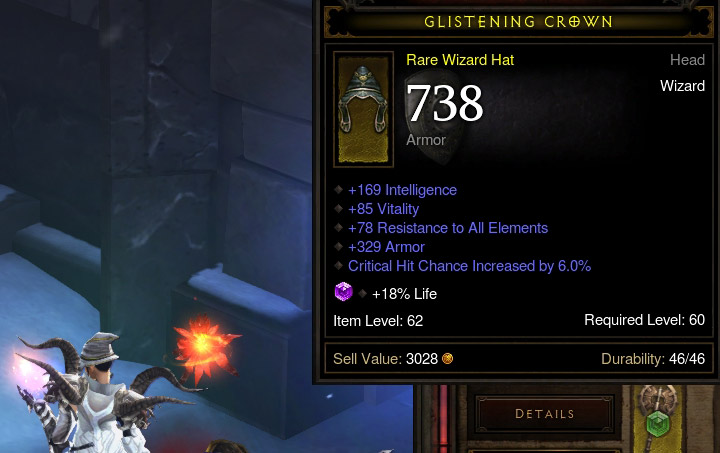 When Magic Find and Paragon increase I see more and more drops. Lot of people says MF doesn't work. In my opinion it works very well and I see big difference in number of drops between, let say, Paragon 1 and Paragon 90. Below my example drop from just two Act 1 runes. 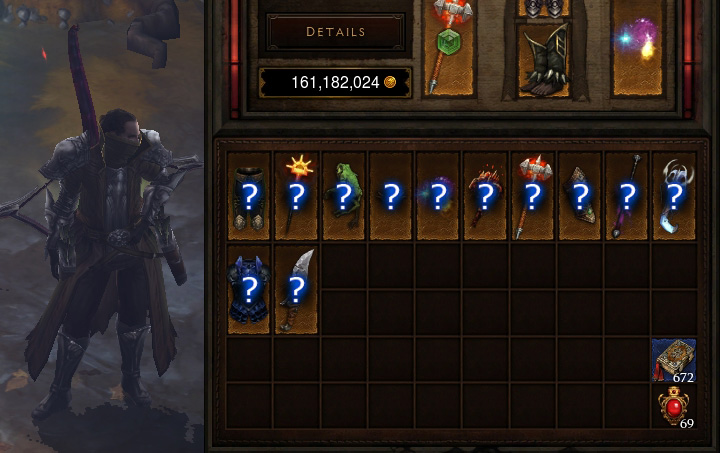 Of course there was also countless number of yellow items. Those Legendaries of course was worth nothing but usually I get 1-5 rares which are worth putting on AH.

To no die from boredom I often was playing through whole acts. When I was focused hard just for exp I was trying to play at as many zones as possible from single act. Playing over and over on 1 map can get you crazy pretty fast.

ACT 2
1. Vault of Assasin (only till get 5NV)
2. Dahglur Oasis (+ most of extra dungeons there)
3. Forgotten Ruins
4. Eastern and Western Channel

ACT 4
Whole act from beginning, it is goin' really fast. Important thing is to enter it from Act 3 with 5NV. Since patch 1.0.7 stacks transfer between acts.

That all folks ;) Below there is screen from 1 of my the most hardcore days (lot of hours spend with Diablo 3). Times for exp/h are real times so they include repairs, picking up items, identify and selling, making new games or go out fast for something to eat or WC ;) It is easy to get more exp/h ratio with not pick up items or not goin to WC ;) but I am not robot and I prefer casual playing. My records was like 110-120 exp/h (with pick up yellows). Oh, in the table below, those weird 1 exp/h are just breaks. 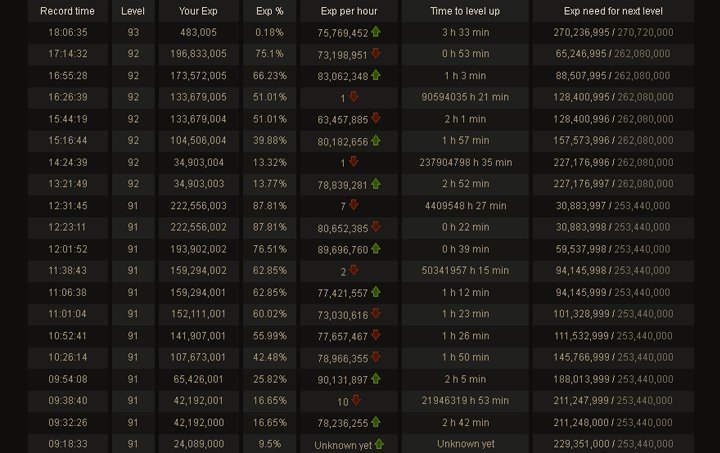 Oh, and here are my profiles:
- Battle.net
- Diablo Progress

Diablo 3 Exp Timer is very simple and yet very powerfull Paragon Level Calculator. Choose your level, type your experience points and click "Record!". Go play and make some hardcore exping ;) After some time go back to this website and update your exp by retyping your current exp value and hit "Record!" button again. You will see your personal Diablo 3 Paragon Level Chart with all usefull informations like time left to level up, exp per hour ratio, exp for next level and much more!